On Friday my mam and I when shopping to the Metro Centre. I needed a couple of things for our cruise (four weeks and three days…) and also some new bras.

I know M&S sometimes gets a bad press when it comes to measuring for bras but I’ve always found them to ok.

While I was waiting my turn to be measured (they were busy) we had a look at the various non wired bras (can’t stand wired…) and I found some styles that I liked and that came in the size that I was expecting to be, given that I had lost 12 lbs in weight.

‘Pauline’ shouted out my name and the first thing she said was ‘I’ve had you before and if I remember, I had problems finding you a bra….’ She was right. See ‘What no blog - March 11 2006’.

She took the first measurement.
Pauline: What were you previously.
Me: 34DD.
Pauline: You’re still a 34.

As the bra’s I’d been looking at earlier didn’t come in industrial strength sizes, I had to go to the bullet proof, passion killer range.

I think Pauline must have felt sorry for me as she came back with the least offensive ones they had, which to be fair, were rather nice.

Given that I’d like to lose some more weight, I wonder what size I’ll be then – 34G…

I don’t know what it is with our neighbours but for some reason they seem to like both our wheelie bin and our recycle black box.

Our brand new recycle box got swiped two weeks after we got a replacement for the one that was stolen. We didn’t dare phone the council to ask for another replacement in case they thought we were stock piling them.

This morning when I went to go to my mams I found that our bin had been swiped.

I can understand people taking in the wrong bin by mistake as they all look alike, but ours had our address on the front and back painted in large letters and numbers.

Come bin out night next Thursday we’ll be kidnapping it back ! ! !

No your eyes don’t deceive you

Yes, I have put fingers to keyboard…

The problem with the BOGOF household is we’re really rubbish at keeping a diary. Plus there hasn’t been anything exciting to report.

I’ve been spending most of my time making shirts for our cruise – 5 weeks and counting ! ! !

Last Friday while I was at my mam’s I had to borrow her new sewing machine (the one we bought her for Christmas) to sew the button holes as my machine is having a temper tantrum and won’t let me stitch them.

My mam then decided she liked one of shirts and asked if I could make her one as I had some spare fabric. Four shirts done, only two more to make.

Last weekend we were in Scunthorpe for a conference team meeting. In the next couple of weeks we’re off on our travels again (and I don’t mean on our cruise. Did I tell you it was 5 weeks and counting…) This coming bank holiday weekend we’re off to Swindon and then Maidstone to have a look at two hotels for spring 2010 conference. Then the weekend after that we’re up in Glasgow to look at two hotels for spring 2011.

While I was on the BA website this morning filling in the required passenger information report for our cruise, I checked our flight details and we’ll be using the dreaded terminal 5 ! ! ! Thankfully it’s only to and from Newcastle and from Rome. Our Barcelona flight is from terminal 1.

Marie
Posted by Marie and John at Wednesday, April 23, 2008 No comments:

My third ‘sorry’ was to the two bus spotters* in the Cliff Pub.

As I mentioned Thursday I like my coke really cold so get a separate glass of ice to pour the coke over the ice.

One Saturday night when we were in the Cliff, my glass of ice had quite a bit of water in it. As I didn’t want to dilute my coke I needed somewhere to get rid of the excess water.

One of the bus spotters finished his pint then said to the other one, who had about a third of a pint left, “are you ready”. The other one nodded and they both left the lounge.

So I went over to the table were the bus spotters had been sitting and poured the excess ice water into the glass which had the lager in it.

About five minutes later they returned ! ! !

The one who’s lager I had watered down picked up his glass and stared at it. He then said to his friend that his glass was fuller than he had remembered, to which his friend told him not to be so stupid…

* they were two men who talked of nothing but buses all night. Ask Chris as he’s been in the Cliff when they were there - and experienced them in bus spotting mode ! ! !
Posted by Marie and John at Saturday, April 12, 2008 No comments:

My second ‘sorry’ was to two members of Radio Sunderland for leaving an empty bottle of Champagne outside of their room at the Plymouth hospital radio conference.

John had been given a bottle of fizzy for his 40th birthday and up until that time hadn’t had a chance to drink it.

Plymouth is quite a distance away from Sunderland so we decided to break the journey by staying a couple of nights each side of the conference in Stratford upon Avon.

As it was our first ‘dirty weekend’ away together we thought it would be an ideal time to drink the fizzy so took the bottle with us to Stratford.

We couldn’t find anywhere to dispose of the empty bottle so had no option but to take it with us to Plymouth.

I like to drink my coke extremely cold so whenever we were out anywhere I would always ask for a separate glass of ice so I could pour the coke onto the ice.

The hotel in Plymouth had an ice making machine so it was perfect for the cans of coke we brought with us. However there was one small problem, we didn’t have anything to up the ice into. That was until we spied the barman put a wine bucket on the bar. As soon as his back was turned we swiped it…

Not only did we have a fizzy bottle to get rid of but a wine bucket as well. No problem. We decided to put it outside the room of the two females members from Radio Sunderland who luck would have it had the room opposite us.

We had arranged to all meet up for breakfast so they were coming out of their room at the same time as us, so too was another member from Radio Sunderland who had his room just along the corridor.

He took one look at the fizzy bottle and bucket and demanded to know what they had been up to that night.

They pleaded their innocence several times over but he was having none of it and kept going on, and on and on about it all weekend…

Marie
Posted by Marie and John at Thursday, April 10, 2008 No comments:

A couple of years ago Ken Bruce on his Radio 2 programme had a slot called ‘sorry’ where people wrote in and ask for forgiveness for something they had done. I had three ‘sorry’s’ read out. Here’s the first one.

It was to say sorry to the owner of Castle Howard as I had vomited all over his marble floor. Before anyone says anything I wasn’t suffering from a hangover ! ! !

I’d just had bought my first car so my mam, dad and me decided to go away for a couple of days to Scarborough. On our last night there mam thought it would be a good idea if we got some fish and chips and ate them over looking the beach.

Unfortunately both me and my dad ended up with food poisoning from the take-away so we were not feeling in the best of health the next morning.

My mam decided that a visit to Castle Howard on our way home would take our minds off feeling ill. We must have only been in the building ten minutes when I really didn’t feel well at all. I explained this to my mam and her reply was ‘of course you’re not feeling sick…’.

I pleaded with her that I really wasn’t feeling very well so reluctantly she found a guide and said to her, ‘my daughter is feeling… no make that, my daughter has been sick’.

Yep, I was re-enacting the scene from the Exorcist all over the marble floor and became a tourist attraction as visitors stopped and watched ! ! !

We were quickly taken to a private loo where I could continued my throwing up.

Marie
Posted by Marie and John at Wednesday, April 09, 2008 No comments: 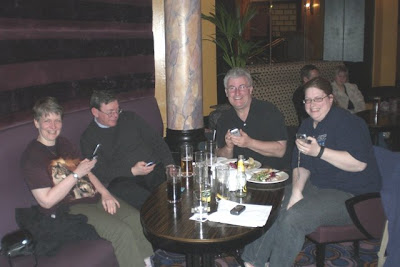 21:13 From : Emma To : Don
A nice quiet gay bar, good food. mikes a bit worried about some of the crumpet, eyeing him up! lucky him! hows June and Diane doing? em x