Miles and miles of deserted beaches ...

Today dawned bright and sunny so Marie and I went for a little walk along the sea front and even to the end of the pier. This may sound like nothing out of the ordinary, except that it’s a place we’ve never been before. Mainly because in our younger days the pier was locked and closed because the council wouldn’t cough up the money to repair damage done by the Luftwaffe. All through my youth it was strictly out of bounds, something to do with the lack of railings and the 50 foot waves that crash over it in the winter (come to think of it, railings aren’t going to help much anyway). 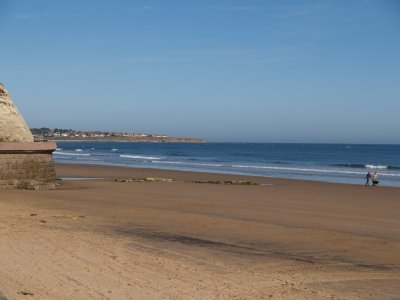 The other surprise of the day was just how quiet it was. Miles of beautiful unspoiled sandy beaches, on a warm sunny day, one without any mist for a change, and hardly a soul about. Their loss.

Because there hasn’t been anything to report…

There’s been nothing for the customer from Hell to make an appearance.

No culinary disasters in the kitchen.

No Motherisms at Sainsburys yesterday.

And our new neighbours have been relatively quiet for once.

Lets hope next week is a little more exciting ! ! !

Marie
Posted by Marie and John at Saturday, September 23, 2006 No comments:

On Saturday we had to go to London for September’s HBA chimp tea party – sorry I meant executive committee meeting. Thankfully it was our last one. Hurray ! ! ! !

We had to fly down as the trains have been a non-starter for a while. GNER’s usual January/February maintenance work is still ongoing….

Although it did mean being up at 4am and not arriving back home until 10.45pm, it’s a much better journey than the train.

Bearing in mind the current security joke at airports, I decided to leave behind my deodorant and lip balm and buy some at Boots in the departure lounge.

However I was not prepared to leave behind my cold sore cream. The BAA website stated that as long as lotions, gels or creams are prescription medicine and can be either tasted or verified as such from a pharmacist on site, then it would be allowed.

As my cream is a prescription medicine and clearly states POM and says to be administered as directed by a physician, then it’s the genuine article.

I declared it to a member of staff outside the entrance of security and having duly tasted it was let through. As if not being allowed any liquids etc and only the tiniest bag as hand luggage was bad enough, we had to remove our shoes. I’m so glad I didn’t wear the pair of shoes with the holes in….

Depending on how high they set the sensitivity of the metal detector, my hip sometimes sets it off. However this time it didn’t (it did coming back at Heathrow…).

Both our shoes, coats and John bag, containing our sandwiches which surprisingly were allowed through, bizarre ! ! , got the all clear. My bag didn’t.

The security staff at Newcastle airport aren’t the friendliest or nicest of people. Those who are nice are newcomers and haven’t got their degrees in nastiness yet.

I was told in no uncertain terms that I couldn’t take my cold sore cream on board so I pointed out that it was prescription medicine and had POM on it. It then become two against one (John either decided to let me fight it out myself or was clearly embarrassed – I’m not sure which ! ! !) as another member of staff, who if smiled would crack her over made up face, joined in the argument.

I was standing my ground so it was taken to Boots for further advice. They wouldn’t let me take it as it wasn’t prescription medicine. The minimum wage staff in Boots clearly didn’t understand what POM meant.

It now became a battle. I was not having it confiscated so again stood my ground. It then became three against one as they asked advice from a supervisor. I put my case forward and was allowed to keep it. Result ! ! ! Customer from Hell 1 – Airport Security Staff 0.

I reluctantly decided not to make it a score draw as I’d be too knackered to put up a fight so asked June if she would look after my deodorant, lip balm and cold sore cream until Norwich conference and phone the doctors tomorrow for a repeat prescription. Lucky I still have a couple of weeks left on my pre-prescription payment so it won’t cost me anything.

I read today that Chelsea Clinton also had a bit of trouble at security at Heathrow airport. She refused to hand over her Chanel makeup using the ‘do you know who I am’ phrase. She was allowed to keep them, then personally escorted to the VIP lounge.

It’s soup Jim but not as we know it

Seeing as we’ve started our diet (yet again…) I decided to make some ‘no points’ soup.

I got the necessary vegetables last week in Morrisons and as they didn’t have any green cabbage I bought red cabbage instead. Bad move ! ! !

The soup looked fine in the pan until I came to ladle it into the bowl. The red cabbage had turned the onion, leek and spring onions a lovely shade of blue and the liquid resembled purple ink.

It tasted ok but the colour really put me off so sadly it went down the sink, having been strained though a colander first – which has now been stained purple….

Marie
Posted by Marie and John at Wednesday, September 13, 2006 No comments:

Saturday was Marie's birthday so we went out for lunch to the world's best Chinese restaurant which, as some of you know, in on the sea front.

We were scheduled to have some pretty extreme tides, the highest for 20 years. Now, as you may expect, on either side of an exceptionally high tide you will get an exceptionally low tide. I can honestly say that the last time I saw the tide so far out I was still at school (and you all know how long ago that was).

Add to the mix a very strong on-shore wind and we had a recipe for disaster.

However, I'm please to say that high tide was about half an hour after mid-night, and we lived to tell the tale.

I’m ecstatic to report that we’ve finally finished painting and decorating the hall and landing. It’s been a long hard (and at times painful) slog but it’s done.

I’m also pleased to report that Vardy’s, came and collect my car yesterday. They couldn’t find any thing wrong with the brakes but at least they’ve been looked at. Woe betide if I get stopped by the police ! ! !

I mentioned on Wednesday that we were going to visit a chocolate factory in Leyburn on Thursday. It was a tiny place, so Cadburys certainly don’t have anything to fear, but it was well worth a visit. Seeing as it was free to look around we felt it only right to sample their products…

Right next door to the chocolate factory was another little gem of a place, the teapot shop. It’s a factory workshop making novelty teapots. I’ve been there twice before and have never left empty handed. This time the birthday bunny bought me a AGA teapot.

We also stumbled on a wonderful little fabric shop. Again I couldn’t leave empty handed. We then drive to Ripon (to find a cash machine as the fabric shop didn’t take credit cards) and had a lovely walk along the canal.

Today I came one step closer to the big 40 (only 731 days to go…..). I got lots of lovely presents from the birthday bunny – even if my mam thought I was very sad for getting series one of both Quantum Leap and The Muppet Show on DVD.

Off to have a huge piece of chocolate birthday cake (full of zillions of calories..), washed down with a bottle of fizzy whilst watching the Last Night of the Proms. Makes you proud to be British ! ! !

Marie
Posted by Marie and John at Saturday, September 09, 2006 No comments:

The customer from Hell strikes again

At precisely 8.30am this morning I rang Vardy’s about my brake lights. Jenny’s email must have worked as both service receptionists were ‘busy with other customers’… I was told someone would ring me back – eventually. “No”, I replied, “this is a matter of urgency so they will call me back within five minutes”.

Five minutes later (most impressed….) ‘Donna’ from service department rang and asked what the problem was so I explained.
“Can you drop it off sometime today”.
“Er no. It doesn’t have any brake lights.

Donna starts to get stoppy. “Well how do you expect us to fix your car if you won’t bring it in”.

“Excuse me, but it’s illegal to use a vehicle without any brake lights. What happen if someone runs into the back of me or I get stopped by the police. I’m not getting three points and a fine because of something that isn’t my fault”.

She then realises that she isn’t going to win this round so puts me on to her manager.
They will be collecting the car on Friday morning.

In other news. Had a lovely day at Eden Camp. For those of your who don’t know, it’s an old POW camp in Yorkshire which has been turned into a WWII museum. We didn’t however recon that it would be besieged by OAP’s who decided to take a trip down memory lane. I’ve never seen so many walking sticks, wheelchairs and motorised scooters in my life…. It was like going shopping on a Thursday afternoon in Morrisons ! ! !

Change of plan for tomorrow. Instead of going to Alnwick Castle, we’re now heading back into Yorkshire to a place called Leyburn. Rumour has it that there is a chocolate factory there ! ! !

Marie
Posted by Marie and John at Wednesday, September 06, 2006 1 comment:

I’m pleased to report that we had a lovely holiday last week in Stratford upon Avon.

Had a pleasant drive down and considering it was bank holiday Monday, there wasn’t much traffic on the road which made a change.

Tuesday we went to Warwick Castle and we were most surprised to find that they had Trebuchet which they shot twice a day. Rather impressive sight.

Wednesday was spent wandering the town and shopping. Could have been seriously poor as we visited my two favourite shops – Lakeland Limited and Fred Winter which stocks some wonderful dressmaking fabric.

Thursday we visited Lapworth. Not only does it have one of the most loveliest places to have a picnic lunch but it’s also the village where I’ve based my novel.

On our way home on Friday we did a detour to Northampton to have a meeting with the hotel.

Saturday, Sunday, Monday and today were spent – yes you’ve guessed it - painting…. However the end is nigh as there’s only the top wardrobe doors to fit and a quick touch up on the walls.

That’ll have to wait until Friday as tomorrow and Thursday we’re off to Eden Camp and Alnwick Castle with my mam. Never been to both places so it should be interesting.

And finally my car went in for it’s yearly service today. Everything was fine until I arrived home.
“I think you’ll be seeing a bit more of Vardy’s”, said John who had followed me home.
“Why”.
“You drove home with no brake lights working…”

They will be getting the call from you know who tomorrow ! ! !