You couldn't make it up

Many of you will know that I drive an Alfa Romeo, and have done so since 1987. I'm currently driving my seventh.


I know, I know. They have a reputation for poor reliability. Generally speaking I haven't found this to be true. In all that time I've only had three problems. One was a failed starter motor (if you ever need a starter motor for an alfasud or an alfa 33 I've got one in the garage). Another was a transaxle problem, and the third occurred a couple of months ago.


My current car just passed it's tenth birthday. I didn’t mean to keep it so long, but with just 44,000 miles on it, it's still in good condition. Probably better than some I've bought in the past. Then it stopped. On the way home from work. After maybe half an hour I got it going. It then refused to start after I came out of the Pizza place one Friday night. Had to get he RAC to tow me home. The local dealer claimed to have fixed it, but three days later it stopped in the outside lane of a dual carriageway during rush hour. Same RAC man. Thankfully he saw the funny side of it.


This is where Alfa Romeo are let down. The dealers. The car wasn't safe to drive, so I asked the service manager at my local dealer for advice. He took the view that my problems were no concern of his. He did this in a manner that was aggressive and intimidating. Clearly he doesn't understand that he is the public face of the brand. I ended up paying serious money to get someone to put the car on a truck and deliver it to the dealer, where it would have a new sensor fitted, and the annual service carried out. Except that they forgot to do the service.


On top of this, I spoke to the sales people, and was quoted “four to five months” if I wanted to buy a new car.


So yesterday I bought this. 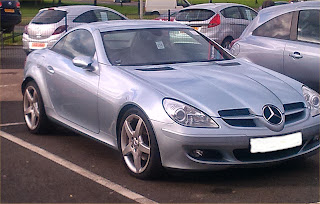