For my fortieth birthday my lovely friends bought me a gift experience. There were so many things to choose from, however I decided on a day cookery course at Swinton Park in Masham, North Yorkshire.

Because of my knee I decided to wait until the New Year to book the course, as I expected my knee problem to be something simple as a damaged cartilage which could be fixed pretty easily.

However as you know things didn’t quite go to plan with my knee. The course entails standing which is something my knee can’t handle at the moment and whilst I could dose myself up with loads of painkillers, it’s not really practical given the side effects of the tablets.

I then thought about going on a wine tasting experience also at Swinton Park. However that has a lot of standing as well, plus because of my tablets I’m not supposed to drink that much. A glass or two of wine is fine but definitely not the quantity involved in wine tasting and I’m a drinker, not a spitter…

I had a look through the companies website and there were non-standing experiences that caught my eye. However as the best time for me to partake in them would be the summer, that’s out of the question again because of my knee. I could either be in hospital or stuck at home recuperating from my operation.

Yesterday I took delivery of this. 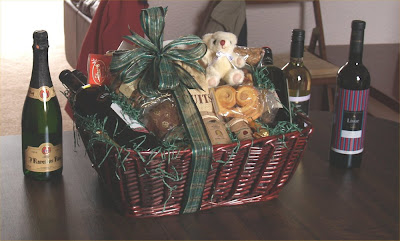 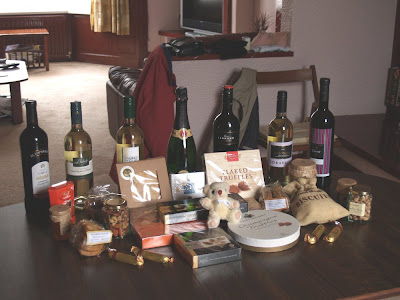 As you can see it’s huge. John very kindly offered to help me drink the wine seeing as I can’t have that much. Isn’t he so thoughtful…

I hope my friends aren’t too disappointed in what I’ve chosen. I would have dearly loved to have gone on the cookery course but sadly it isn’t wasn’t meant to be at the moment.

I have made a promise to myself that once I’m fit and well I will go on the course so I’ll then dedicate it to my friends.

I’ve made a start on my dress for Blackpool conference gala dinner. The toile* is finished and ready to be scrutinised by my mam tomorrow.

Even though my mam keeps reminding me over and over again how she hates dressmaking and doesn’t want anything more to do with it, I’ve still got to take it to her for inspection.

Once she has given her approval (more like – you’ll have to let it out a bit more as it shows up your spare tyres….) I can then cut the dress out in the proper fabric. Or should I say my mam cuts the dress out and I become the scissors passers mate…

She’ll graciously allow me to sew the dress at home however I must bring it back to her for the final inspection.

I did once buy a dress pattern and some fabric without her being there and she still hasn’t forgiven me ! ! !

Only something your mother would say II

On Friday my mam and I went to Dainty Supplies (local haberdashery and fabric store) to find a pattern and some fabric for my Blackpool conference gala dinner dress.

I’d already made a short list of 10 having looked at the various patterns online so it was just a matter of choosing which one I liked the best.

As you know my mam is quite opinionated so she told me exactly what she thought of each pattern:

Sorry for the lack of blogs but things are starting to get busy, busy, busy for Blackpool conference.

It started with a few flurries mid morning then came down really heavy around noon and didn’t stop for several hours. Thankfully by the evening most of it had turned to slush.

Friday we were in Blackpool for a meeting with the hotel to finalise things for the conference. Then after the meeting we drove to Doncaster as we had a conference team meeting the next day.

We had arranged to meet with Emma and Paul, who were also staying at the Premier for the team meeting, at 6.15pm as the Beefeater Pub had a special priced three course meal for £9.99 each, but you had to be seated by 6.30pm.

We were running a little late having got caught in traffic on our way to Blackpool, which made us half an hour late for our meeting, then we hit rush hour traffic big time on the M62.

At 6.00pm we were only four hundred yards away from the Premier when we hit yet more traffic jams. The police had closed the very road we needed to get to the hotel...

It was dark, we were in the middle of a huge business park with no divisions signs, and a railway line in the way, and we had no idea how to find the hotel.

Eventually, with more luck than anything else, we stumbled on the hotel, and finally made it into the restaurant at 7.30pm. The restaurant staff had very kindly let us have the meal for £9.99 as Emma & Paul had been seated at the table at 6.15pm.

Blackpool conference, like the last time, is a complete sell out, and unfortunately the hotel can’t give us any more rooms. Apparently there’s an aerobic convention taking place somewhere in Blackpool and they’ve taken up the rest of the rooms.

This means that the ‘Innkeeper from Hell’ has had to make an appearance as would-be delegates complain that ‘there’s no room at the inn’ and are not happy bunnies….

This afternoon I had to go to the doctors to get some stronger painkillers for my knee as the others weren’t doing anything. I’ve now got four different one to take, each with their own various side-effects.

We haven't got any.

OK, it's plenty cold but the ground is bare and dry. No chance of a day off work round here.

And before I close, here's something I meant to post last Thursday. If the date means anything to you, so will the cartoon.

… to try and think of something to blog about.

Sadly I can’t come up with anything.

We really do lead exciting lives….