There are no flies on us…

…but there are in the kitchen.

We have a slight problem with blue bottle flies in the kitchen at the moment.

We first noticed a couple of them on the kitchen window on Sunday afternoon but just put it down to the back door being open.

Then a few more appeared.

Monday morning, as John was going to work, there were three on the window. Just as I was about to head out to my mams an hour later I had to chase five outside.

When I came back home there were over a dozen on the window. Horrible !!!!!

I became research gal on the internet as we couldn’t figure out where they were coming from and, more importantly, how to get rid of them.

Couldn’t find anything on the internet so rang a pest control company in Washington as they offered free advice.

Spoke to a lovely little man, who after I explained our fly predicament, told us what the problem probably was. It would seem that the most likely cause of the flies is a dead bird in the kitchen chimney.

Although he works for a pest control company, he advised against calling them out as we would be wasting our money. They wouldn’t be able to gain access to the source of the problem so would bill us for over £50 of fly repellent, when we could get the same stuff for under £5 at a DIY store.

So the kitchen is pretty cool at the moment as we have both the window and the back door wide open (so glad it’s the summer and not the winter….) to let them out, and it smells a bit with the fly repellent stuff.

I’ve been assured, thankfully, that the problem will only last for a few days.

This morning I had a doctors appointment. The cocktail of painkillers I’m taking are making me bunged up in the loo department…

No sooner had I sat myself down when she said ‘you look rather pale. Are you ok’.

For the next five weeks the television viewing in the BOGOF household will be in overdrive.

Then it’s three weeks of the Tour De France.

The summer has definitely started…

Yesterday I was back at the hospital for my six week follow up after my local in April.

I should have been there on 27th May but thanks to a NHS admin cock-up, someone somewhere forgot to update my medical records so they had no record of me having my op. Wonderful ! ! !

I still never got to see The Man Himself. I did at least see a consultant who actually has his own patients and not some sidekick registrar. I did hear a rumor a few months ago that The Man Himself had left. Maybe it’s true and the NHS aren’t letting on to his patients. Knowing the NHS I wouldn’t put it past them.

Anyway the little consultant man (he was little by the way…) asked if the local had worked. I told him no it hadn’t.

I got the impression that they had been building up their hopes that the local would work. Sadly I rained on their parade…

Seeing as the local didn’t make any difference, they’ve now decided that I need to have a MRI scan done on my knee. Then it’s looking like they’re going to have to do some keyhole surgery on my knee before they’ll commit to replacing my hip and knee.

Yes – it’s that time of year again. The Seagulls are back. Regular readers will know that we’ve had a family of seagulls nesting on a rooftop near us for the past four years. 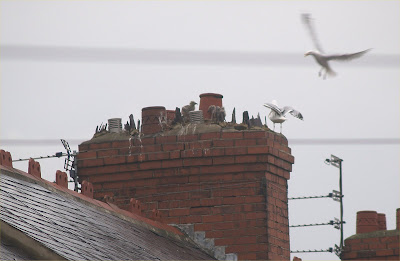 This year there are only the two chicks instead of the three we had last year, but judging from their size, the food supply has not been reduced accordingly.

Goodness knows how big they will be when they leave the nest in August.

Last Friday while at my mam’s we watched the tennis from Queens.

One of the commentators mentioned about players having superstitions to which my mam said, “there’s no more so than Evon”.
“I didn’t think Evonne Goolagong was superstitious”, I replied.
“Not her”, she said, “Evon”.
“Do you mean Ivan Lendal”, I asked.
“No”, she said getting a little agitated.

As I couldn’t think who she was one about I had to resort to 20 questions. Eventually I hit on the right person – Goran Ivoniservic…

The topic of tennis continued and we discussed Borg and Federer. She commented that they both had respect for each because they came from Norway and Denmark.

“Mam”, I replied, “Borg is Swedish and Federer is Swiss”.
“What does it matter”, she said, “they’re all Scantinavian”…

Just a quick blog to say we’re both still here…

Sorry it’s been a while since we blogged but there hasn’t really been anything exiting to blog about.

Marie
Posted by Marie and John at Thursday, June 11, 2009 No comments:

When we were at Chris and Jenny’s for New Year, Jan and Andy had brought with them their Wii. After playing tennis and bowling, we were both hooked !!!

Two weeks later, after Argos had finally got the Wii’s back in stock, we bought one.

When we went to the Metro Centre to collect our glasses (as requested by Jan, a photo of me wearing them will appear shortly), we called into one of the computer game shops, just to see what games they had for the Wii. Two of them caught our eye, Sport Island and Job Island, but as they were £18 each, decided not to buy them.

As we were still interested in the games, I did a search on the interest to see if I could find them cheaper than £18, but couldn’t find anything.

Just out of interest I tried Ebay and sure enough both were there. We’ve never used Ebay before so it was all a bit alien to us. Having completed all the various registrations, we set a price which we were prepared to pay for it and placed our bid.

Having been outbid and beaten a couple of times, we eventually won Sport Island for 1p under what we were prepared to pay for it.

I think we might be using Ebay more often…