One of the disadvantages of living in a terrace house, especially one with no garden, is you don’t see much wildlife. Ok, that’s not strictly true. A few years ago on the way back from the pub we did rescue a hedgehog and a frog from becoming road kill, but that’s about it.

The only birds we get are pigeons, whose ancestors stayed instead of moving house with the guy who kept them, and seagulls. 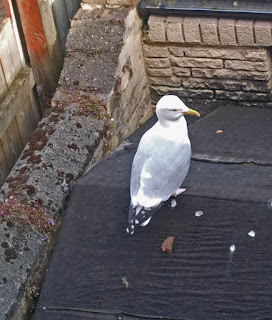 A few weeks ago we were in the kitchen preparing dinner when I noticed out of the window a seagull sitting on the shed roof. It had a good peer through the window to see what we were doing then flew off. 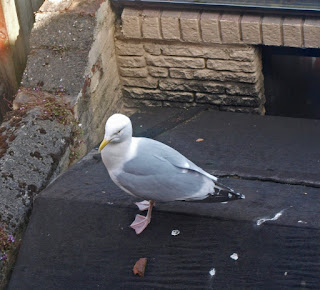 The next day again whilst we were in the kitchen preparing dinner, Mr Seagull (we have no idea if it’s a male or female so we just called it a he) returned, had another good stare through the window then flew off. 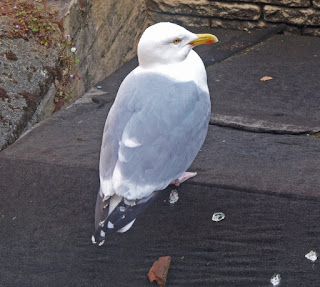 Come six o’clock Mr Seagull would arrive, have a good look though the kitchen window, then 15 minutes later fly off.

As it was around nest making time we think he might have wanted to get away from Mrs Seagull as sometimes he would settle down for a quick nap before flying off.

I am SO sorry for not blogging these past – coughs – months.

Regular readers – if we have any left !! – will be sick of us sounding like a broken record (for those too young to know what a ‘record’ was, it was something we geriatrics – well not strictly me as I used to listen to cassettes instead – used to listen to music. It was large, round, had groves and made of plastic) by keeping saying ‘we’re going to blog more often’ etc, etc.

In our defence, we’ve never really led exciting lives, and it would seem that since John took early retirement from work, we’re like little hermits.

Back in January (or two postings ago.....) I blogged my wish/want list (I don’t do new year resolutions) and as we’re nearly half way through the year I thought I’d give an update on how things have progressed.


Four out of 12 isn’t too bad. Plus one of those, the Euro lottery, is really out of my hands.

I have as well been quite busy this year with something else which I will tell you later. Watch this space....