Power to the people

Yesterday I had a phone call from the hospital complaints department.

I had been given a new appointment of 1st July.

Nothing was mentioned about why I had been put back on the waiting list or even an apology for been given the wrong information.

However I was happy with the result.

The Patient from Hell

Yesterday I received a letter from the hospital to say that my appointment to see a consultant about my back on the 15th July had been cancelled, but they had given me an alternative date and time of 22nd June at 2.20pm.

As I would have preferred a morning appointment I rang the clinic earlier today and asked if there were any available.

Before the little reception woman looked for another time she cancelled June’s appointment, then said the next appointment she could give me was 27th July at 2.20pm.

I said that wasn’t any good so could I have the June’s appointment back.

No was the answer...

Because I was a new patient for that consultant and had ‘refused’ their appointment of 22nd June, I had to go back on to his waiting list. An appointment will be sent out when I got to the front of the queue.

To say I was not happy was an understatement !!!!

I was straight on to the hospitals complaints department and the Patient from Hell made an appearance.

I told them I thought it was extremely unfair to be put back on the waiting list when it was them who cancelled my appointment in the first place. I also pointed out that it was a bit rich to put in the letter that if the new appointment time wasn’t convenient, I had to let them know and they would arrange a new one.

The complaints officer agreed and said she would look into it and get back to me in the next couple of days.

…. And I’ll be the owner of a brand new Renault Clio.

Having started with a short list of four cars – Vauxhall Corsa, Peugeot 207, Ford Fiesta and Renault Clio, - it was whittled down to the 207 and the Clio.

This afternoon the Clio became the winner.

Back in January I set myself some challenges - to read two books a month, finish off the blankets that I was crocheting and knitting and complete the two projects I was cross stitching.

So far this year I’ve managed to read:

Home in time for breakfast – a WW1 diary
MASH an army surgeon in Korea
Rescue me – my life with the Battersea dogs
Voices from the Home Front
Remember, Remember, the 5th November (history of Britain in bite size chunks)

Not quite the two a month I was hoping for, but considering I’m a slow reader, I don’t think that’s too bad.

As you can see I’ve finished my crochet blanket. 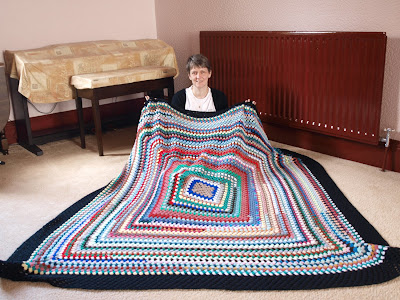 I also finished chart number three (out of nine) on one of my cross stitch projects.

Here’s to the next few months…