How the Brethren received the news

Now we have heard how the fourteen Brethren who were to be cast out had been selected and how emissaries had been dispatched bearing the news.

But when the Brethren received the news, they were divided in their opinions. Some heard the news and were content, but some went about saying loudly, “This is not right, for verily we hath booked our places at the Hotel and we should not be cast out to the Ibis. Let some others be cast out in our place”. And some were greatly troubled by this and they didst communicate with Marie and make their wrath known unto her. And Marie was greatly annoyed by this. For verily didst two of the brethren shout at her and also didst they cancel their bookings.

How the fourteen Brethren were chosen

In the first book we learned how Marie and John didst organise an Event and how the hotel did cast out fourteen of their Brethren to the Ibis which is next door. And we heard how he that is called Phil didst talk with the tribe of Rezidor and that it availeth him not.

Now Marie and John didst make a call amongst the Brethren who were cast out saying that if any of ye shall volunteer to be cast out we shall pay thee tribute of ten pounds each, but only four were forthcoming.

At this time Phil didst mention this calamity to the EC and they didst command that the latest to book should be those who were to be cast out. So Marie did send emissaries from Royal Mail bearing letters to those who were the chosen ones.

It came to pass that Marie and John did propose that an Event be held in the town of Northampton, and the Events Sub-Committee did look upon this Event and they saw that it was good and they did say unto Marie and John, “Go forth and organise thy Event”.

After many months of toil the rooming list was completed and Marie did send it unto the Hotel and they were happy. But on the ninth day afterwards the Hotel did return unto Marie saying, “Thy rooming list is too great for our hotel and there is no room at the inn so fourteen of thy brethren shall be cast out and shall have to stay at the Ibis which is nearby. For verily our contract sayeth that thee shall have 100 rooms on Saturday night, to which we have added an extra 20 only”.

And then I’ll have earned my first diet reward. To date I’ve lost 10lbs which is good but not enough.

I’ve still got at least a stone/stone and a half to lose before I reach my target weights. I say weights. I would like to get down to seven and a half stone whereas my mam thinks I should stop at eight stone.

I’ve been having a few problems with the hem on my gala dinner dress so have had to seek advice from my mam. I’ve had it in/out four times and even though I’ve measured it on Gertie, it still looks wrong.

I tried it on this afternoon and in her opinion it looks ok so I’m leaving it as it is. She even commented that it could be taken in as I seem to have lost the weight in all the right places for once.

... that the internet time service hasn't made a mess of daylight saving.

At work I use an internet time source (like one of those radio controlled clocks radio stations use, but over the internet instead) to keep the time and attendance system synchronised.

So far so good, but every time the Americans change to or from daylight saving the time from the UK sources changes too. Yes - I know it shouldn't do that because the source is only providing UTC (what the rest od the world call GMT), but it does.

Now this year Mr Bush decided that instead of changing clocks on the first of April they would change on the eleventh of March. And those states that didn't participate (such as Arizona and parts of Delaware) would have to join in too. Something about saving energy.

And much to my surprise, everything worked. As a precaution I turned the time service off over the weekend but this morning the times were correct and I was able to turn it back on again. Now all we have to do is hope that it works when we change our clocks.

So there you are, you sat around all week hoping for a decent blog and you got a techie one instead. Actually it's been really quiet here. Just keeping out heads down and working towards conference at the end of the month. Three weeks and it will be all over.

Total Eclipse Of The Moon

As I write this it’s raining and it looks set in for the night. I’m very glad it wasn’t like this yesterday.
I spent a part of last night standing out in the street minding a camera on a tripod. It wasn’t as though I was the only one either. All up and down the street there were little knots of people watching. One sad soul even brought out his laptop so he could follow the eclipse on an astronomy website. I stuck to taking photographs. 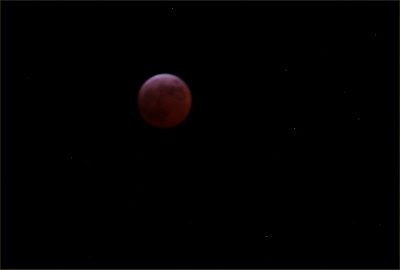 The picture is part of one of a set of larger images. In the originals you can see the surrounding stars and can follow the moon’s path through the starfield.

Really - it must be.

Yesterday was one of those milestones of the calendar. I drove home from work without having to use my lights. Now this may not mean much to our southern readers who have probably had long sunny days since the end of January, but in the North East the days are just a little shorter.

Still it's nice to know it's still light enough to drive at 5:45 pm.

Roll on the proper summer.