Attempted break in at a lottery winners home

This morning we were woken up by Alan, our neighbour upwards, to say that someone had tried to break into my garage during the night. 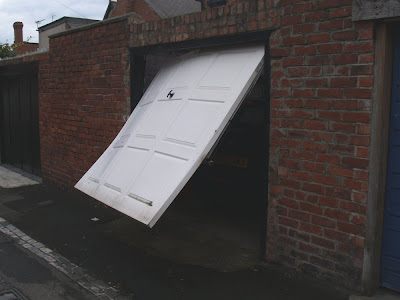 As you can see they did a good job of bending the garage door. Thankfully no damage was done to either of the cars or anything stolen. 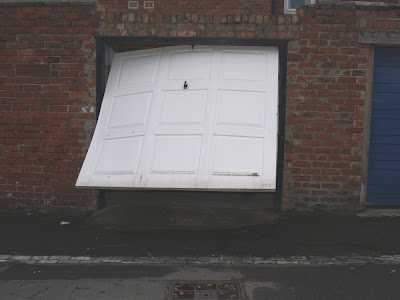 I rang the police straight away and as no damage was done or anything taken it would only be classed as willful damage. They would send someone out at 2.30pm this afternoon. 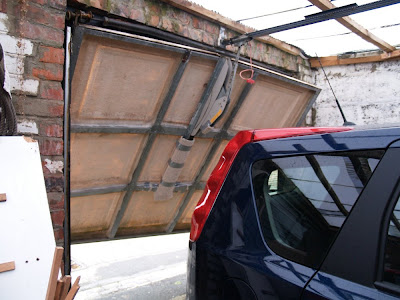 I also rang our insurance company to see if emergency repairs could be carried out to either secure the door or have the hole boarded up until a replacement door could be installed. Apparently garage doors come under building contents and as the buildings claim line isn’t open on Sunday’s I’d have to call back in the morning. Not best pleased ...

John managed to put a large piece of wood between the gaping hole and my car and also put up a large sheet of plastic over garage opening to try and cover it a little.

While we were waiting for the police to come I decided to have a bit play on my computer. Having checked my various emails, I checked our lottery tickets and found that we had five numbers on last nights lottery. So we’ve won £2641.

Anyway 2.30pm, 2.45pm, 3pm came and went and still no sign of the police. At 3.15pm I got a phone call from PC Hall apologising for not coming out as they had been called to an incident. She took a couple of details then said they had arrested two people in the area last night for car crimes and were wondering if the two were related.

She called back about half an hour later to say that the scientific aids would like to have a look at the garage door today so would we mind not touching it or securing it until they had been. They were also now classing it not as willful damage but as an attempted break in so there will be no problem in getting our insurance company to pay up.

I’ll give you an update tomorrow.