Now that the holiday season is almost upon us and our thoughts turn to sun, sand, sea and surf we at the Bogof Blog thought you ought to be made aware of a hidden danger lurking on those tropical beaches. No, it's not the scary shark fin cruising the ocean waves - it's the killer sandcastles.Yes, research in the New England Journal of Medicine found sandcastles are more deadly than sharks.

16 deaths in the US since 1990 were caused by sandcastles, according to Harvard Medical School's Bradley Maron. Compare that to the measly 12 fatalities from shark attacks. Jaws is looking pitifully like a soft-touch.The main hazard appears to be people lethally falling into holes they had dug - presumably for the moat - which means the sandcastles of America must be on a far more impressive scale than the ones seen on the beaches of Sunderland.

More can be found here : http://www.newscientist.com/blog/shortsharpscience/


And on the subject of the seaside, do you recall seeing all those television documentaries that tell you that seagulls nest in hollows and crags on cliff faces. Don’t believe a word of it. This is what you can see (with a big lens) from our bedroom window. 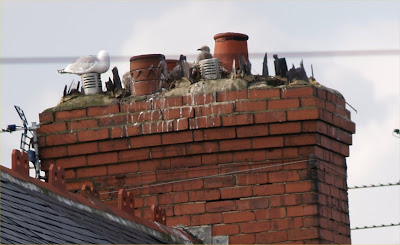 There are three little ones, but we rarely see them all together. And there’s always one parent hanging around to see off any intruders. 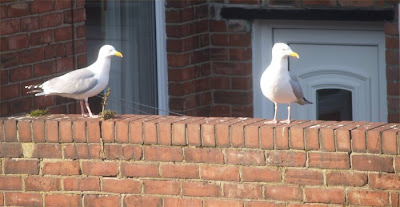 On a more mundane note we've repainted the hall and stairs and everything seems much more stable, so we now await the arrival of the carpet fitters.