For the past 46 days I’ve been unable to have a bath or a shower because of my pressure sore.

As you can imagine I’m a little fed up with the water prohibition. Having a rub down with a flannel isn’t the same as soaking in a hot bath.

I mentioned this to my nurse who took pity on me and ordered some waterproof dressings to go on top of my original dressing.

Although I can’t have a bath I am able to have a shower.

Tonight I had my first shower in over seven weeks and it was wonderful. 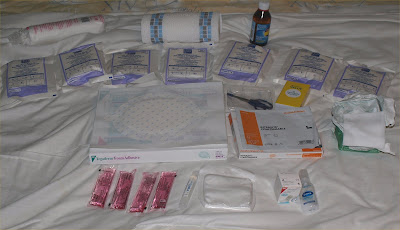 Marie
Posted by Marie and John at Saturday, August 22, 2009 No comments:

So what were the mystery objects ? 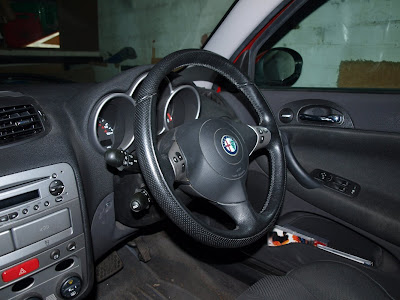 And here's one of the little blighters peeking out from behind the steering wheel. 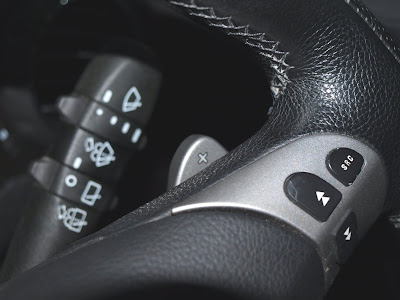 And here's its partner, sitting behind the steering wheel. 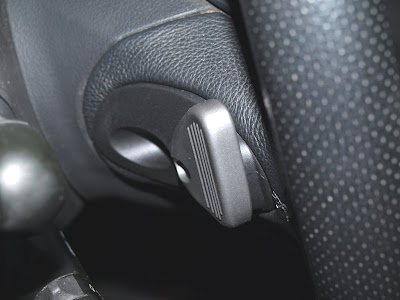 Got it yet. They're paddles used to change gear in a car with sequential transmissionr.

The cost, and remember, I had to buy a matching pair.

p.s. don't know where the reputation came from, but paddles are not at all "flappy".
Posted by Marie and John at Thursday, August 20, 2009 No comments:

I had a phone call this afternoon from the Customer Service Manager at Social Services regarding my complaint letter.

She was appalled at the way I had been treated and promised that a full investigation would take place to find out the guilty people, and action would be taken against them.

She has arranged for the mattress to be collected on Thursday afternoon instead of a week today which was the earliest date the nasty little woman would give me.

The Customer Service Manager was also concerned about the length of time it took for the collection people to pick up the phone, so will be bringing that up with their manager as well.

She’s also going to investigate why the mattress which was supposed to be new, stunk of tobacco.

She even offered to come and visit me at home, along with the manager of the collection people, to discuss my complaint further and to inform me of the actions they have taken. I thanked her for the offer but said I was satisfied that my complaint was being dealt so a visit wasn’t necessary.

Another result for the Customer from Hell.

Can you tell what it is yet

I took delivery of some bits today.

Can you guess what they are, or what they’re used for. And can you hazard a guess at how much they cost.

…the Customer from Hell.

After a long period away she’s back !!!

Today I was waiting for something to be collected. My nurse at the doctor had arranged for me to try a pressure sore mattress to see if that would help my wound. Unfortunately the mattress was too soft and it also smelt of tobacco.

I tried ringing the collection people all day last Monday but couldn’t get an answer. After several rings last Tuesday I finally got to speak to someone and arranged for the mattress to be collected today.

I was in the kitchen this morning when I heard something being pushed through the letter box. Normally I don’t bother rushing to see what has come as it’s usually a pizza or Indian take-away menu. However for some reason I decided to go and take a look straight away.

It was a note from the little collection people to say they had called but no-one was in, and as they could not obtain an answer, I’d have to contact them to arrange a re-collection. I opened the front door to see if he was still there but he had gone.

The little man had not rang the door bell – and I know it working as the window cleaner had been for his payment today – and if he had knocked then it must have been so quiet that even a dog wouldn’t have heard it.

I rang the number on the slip, having waited for over two minutes for someone to pick up and explained very nicely what had happened.

Those immortal words rang in my ears ‘don’t make me angry. You wouldn’t like me when I’m angry’. Guess who appeared. Yep, the Customer from Hell.

A ‘burn its way out of the envelope’ letter will be on it’s way to her manager. That’ll teach her to upset me…

As it’s been a few days since we’ve blogged I thought it best to put fingers to keyboard.

No appointment as yet from the hospital following my MRI scan. As it was two weeks since I had the scan, I rang the clinic on Thursday, like The Man Himself’s Sidekick told me to do if I hadn’t heard anything.

I was told that they had only received the results of the scan ‘yesterday’ and as The Man Himself was on holiday, his Sidekick consultant was looking after his patients. Once the Sidekick had looked at the scan, which I was told would be done shortly, an appointment would be sent out. I asked approximately when that would be and was told October at the earliest. It’s been nearly a year since I first saw my GP about my knee and I’m still no further forward.

My pressure sore is slowly getting better. Most of the dead skin has now gone, thanks to the dressing which liquefies it, and it’s not smelling or leaking as much as before, which is good news.

This afternoon we finally got round to photographing some of the clothes I’ve made, so the dining room became a photography studio. The model we used was very cooperative and didn’t have a hissy fit when there was no make-up artist or hairdresser to make her look beautiful. No, the model wasn’t me, it was Gertie, my tailors dummy. She has this wonderful facility of being able to lose inches from all parts of her body at a turn of a dial. Unfortunately I’m not adaptable…

Once we’ve tidied up the photos we’ll put them on our blog – and no, there won’t be any airbrushing !!!

Marie
Posted by Marie and John at Sunday, August 09, 2009 No comments:

Getting my money's worth

Because of the various cocktail of painkillers I have to take at the moment, it works out a lot cheaper to buy a pre-payment prescription card every three months.

When we had to visit the Minor Injuries Unit in Stratford last Sunday, the Nurse Practitioner raided the Skin Clinic for some dressings as she didn't have anything suitable for my pressure sore in her treatment room.

These dressings proved to be much better than the ones I usually used as they cushioned my sore and stuck to my skin (normal plaster dressings only last a couple of hours before having to be patched up as they always come away).

When I saw my nurse on Tuesday I explained about the dressings and she said she'd order some.

She rang me on Wednesday and said that she had ordered the dressing but only two as they were expensive. When I saw her on Thursday yet again my usual dressing was stuck down with various tape and anything we could get our hands on.

As soon as she applied the new dressing to my sore she realised that they did indeed stick to my skin, so decided to order some to be delivered to the treatment room and some for me to have at home and asked if I paid for my prescriptions so I told her about the pre-payment card.

This morning one of our local pharmacy stores delivered a package containing a box of my pressure sore gel dressings and two boxes of the new foam adhesive dressings with five dressings in each box.

I did a search on the internet to see how much the dressings were seeing as my nurse said they were expensive and it turns out that a box of five dressings costs £47.73. Wow !!!!

Now that's what I call getting my moneys worth....