On Saturday night we had a little visitor to our yarden. The baby seagull from nest number one.

After having a good look around it tried to fly out of the yarden but couldn't. It was still at the stage where it needed a long runway to take off.

It was so pitiful watching it trying to fly but only ending up a couple of feet off the ground.

We knew we couldn't leave it in the yarden as Maxi and Ruby, Sandra our neighbours new cats, like to play in our yarden, and they are known of chasing birds.

John ran round to the back of the house and opened both garage doors then very slowly opened the yarden door to allow the seagull to escape.

The seagull was having none of it and hid behind the yarden door. I tried to entice it out by throwing it some biscuits but it wasn't interested. His mum mustn't have weaned him off regurgitated fish and onto seagulls staple diet of fish and chips, sandwiches and ice-cream.....

John tried to persuade it to move by gently shaking an old shaggy mop close to it but instead of moving forward, the seagull moved sideways and went though a tiny gap between the garage wall and the shed. Wonderful !!!!!

We could hear it moving behind the shed but as the shed was pushed right up against the party wall, there was no way we could get at it. Because Bruce the Christmas tree and Eric the Hosta were on the other side of the shed, and in huge tubs, there was no way they could be moved or for the seagull to get out that way. It would have to come out the way it came in.

As it was getting late we decided to leave it for the night as the poor thing had been stressed out enough. We closed the dinning room curtains so the light wouldn't frighten it and hoped the cats didn't come and visit their playground.....

John knew that I wouldn't settle until it was safely out so began to think of ways the shed could be moved. I was mightily relieved when I opened the dining room curtains yesterday morning to see the baby seagull sitting on the kitchen door step. There were several dirty footprint marks on the dining room window so it had tried again to fly away.

Once again John ran round to the back of house and after opening the garage and the yarden doors, moved his car to the front of the house

The baby seagull slowly walked through the yarden door then out into the back lane. Whilst John was closing the garage door he notice mum and dad seagull gathered around their chick and started squawking. No doubt it was getting a right telling off for being out all night.....

The baby seagull seems to have recovered from his little adventure and is still exploring the roof tops and back lane, but mum and dad are keeping a very watchful eye on him now. 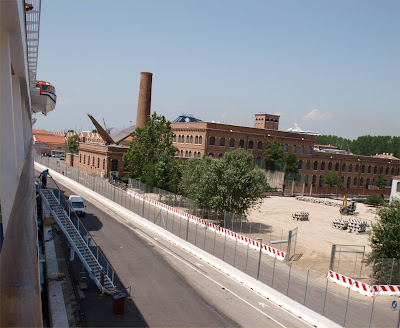