Yesterday morning we placed our Christmas turkey order with one of the local butcher on Sea Road.

Ever since we’ve had Christmas lunch at home we’ve just bought a frozen turkey from Morrisons.

However this year we’ve decided to go for a fresh one. There’s a wonderful old fashioned butchers on Sea Road which we often call in for his fabulous ‘old English’ sausages and peas pudding. So we thought he was the best place to go for our turkey.

There was only one problem with his shop and that it’s not very wheelchair friendly so sadly I had to wait outside while John placed the order. I did though get a wave from the window from Billy the butcher and he sent his regards.

There are several things you notice whilst being in a wheelchair:

Pedestrians/shoppers don’t see you so they walk into the wheelchair.

Because of cars who have parked part on the road and part on the pavement, it’s either extremely tight manoeuvring past or you have to take to the road because you can’t fit through the small gap. I’m thinking of getting a device fitted to the wheels, which when I press a button, metal spikes come out and scratch the side of the cars as I go past them…

Paths are in a terrible condition. The flagstone are so uneven so the ride is extremely bumpy.

Not all shops are accessible. There was one shop (it’s closed now – it was a chained local convenience store which went into administration recently) which had a huge step to get inside. Even I had a struggle to get up it when I was on two legs… However they did come up with a solution to this. Wheelchair uses simply had to press a bell – which was over six feet off the ground !!!!

Marie
Posted by Marie and John at Sunday, November 29, 2009 No comments:

Nothing really exciting to report

Sadly there hasn’t been much happening in the BOGOF household these past few days.

Monday I had an appointment at the hospital to see my consultant and he’s given me two options to consider regarding the future.

Thankfully he doesn’t want an answer soon. Both options are major, with one of them being life changing, so I need time to think about.

The rest of the week passed without any great excitement.

Another small step for Marie

When I was in hospital the physios decided just to let me start walking at my own pace. Normally you have to complete various stages before they let you home – walking with crutches, walking upstairs etc. However as I wasn’t your normal ‘joint’ patient, anything I did was a bonus.

I managed to walk unaided using a Zimmer frame and at various times walking supervised on crutches. However whenever I started to make good progress on the crutches, I’d be back at the ‘woodshed’* and end up back on the Zimmer.

When I left hospital I was allowed to take with me two Zimmers (one for downstairs, the other upstairs) but not the crutches. A referral would be made for me to be assessed to start using them again and I would be notified of this by post.

Last week I received the referral. Someone would be coming out to see me in six months time….

I decided to take matters into my own hands so bought a pair of brand new crutches (even better ones than they had in hospital) on Ebay for £15.

They came on Wednesday and I’m making steady progress with them, though I haven’t gone walking solo with them.

When I was in hospital, due to lack of strength in my non-hip leg and my other being extremely swollen, I wasn’t able to climb stairs.

Now that I’ve got a lot more strength in my left leg and the swelling has gone down in my other leg, I thought it was time to try the stairs again. So yesterday using my new crutches I managed, extremely slowly though, to walk up and down them.

The stair lift won’t become redundant but it’s nice to know that I’m slowly making progress. Who knows that I’ll be doing this time next month….

* the name I gave for the operating theatre
Posted by Marie and John at Sunday, November 15, 2009 No comments: 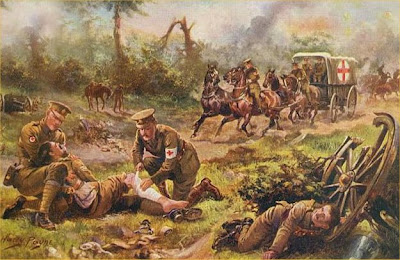 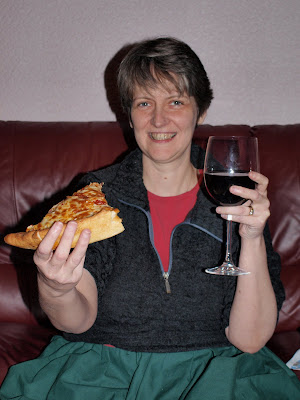 Words can’t describe how good it feels to be back home.

At 8am yesterday morning my consultant popped in to see me and asked how I was. Before I had a chance to say anything, Tracey, the nurse who was accompanying him on his rounds, said that I really would like to go home as I was getting a little fed up as I had been in hospital for nearly eight weeks.

He looked at my wound and the redness from my dressing allergy, then asked if I could cope with everything at home.
“Yes”, I practically yelled at him.
“Ok, you can go home”.
“What! Today”, I asked.
“Yes”, he smiled.

I wouldn’t say that they wanted my side room but I was told I had 10 minutes to pack (I was still in my nightclothes at that time…), and if I wasn’t ready then the discharge nurse who was taking me to the discharge lounge would go without me.

While I’ve been in hospital I’ve kept a diary so you can read all about my exploits.

Finally I want to thank everyone for all their cards and good wishes. It really did mean a lot.

The plastic man hasn't been, but he sent one of his minions today. He wasn't able to say a lot as he's only the monkey and it's the organ grinder who makes the decisions.

He did however say that what Marie needs is to go home and give everything time to heal. We're not complaining about that.

And finally, after 28 hours, the cortisone cream still hasn't arrived.

The muscle graft man (actually he’s a plastic surgeon or “plastic man” as the nurses call him) was supposed to call on Friday. He didn’t turn up. It seems someone at the hospital in Durham failed to process the referral. Now we know from experience that not processing a referral from a GP in good time is commonplace in the NHS, but to fail to process a referral from one consultant to another could have far reaching consequences of the career-limiting kind for someone.

However, there have been other developments. The hospital put a drain dressing on to measure how much her wound was leaking. Very little came out, but Marie’s leg turned bright red. Some sort of reaction to the adhesive we think. It can’t be serious because the consultant simply asked for some cortisone cream to be applied. Of course when that will appear is another matter. On past form it will take at least 24 hours.