Just a really quick blog to say I'm home from hospital. We got back from London on Saturday and am slowly finding my feet - excuse the pun !!!!

Will do a proper update soon.

Time can really drag when you're in hospital so I went armed with lots of things to keep me busy as being bored in hospital is horrible.

I brought with me my laptop, my Kindle Fire, a couple of magazines, two needlepoint cushions (you can see one of them over at my craft blog 'Gertie's makes and bakes'), a Silversea needlepoint glasses case I got free when we were on our cruise last year, a couple of small Christmas card cross stitching and my big cross stitch project, a baby tiger cub.

Ok, it does seem a bit much given that the Prof said I should only be in for about two weeks. However days in hospitals are very long - they are if you're an NHS patient anyway. Last time the day would start at 6am !!!!

Here at the private King Edward no-one comes to wake you up at 6am. You can stay in bed for as long as you like (in fact it's positivity encouraged). The longest I stayed in bed was until 10.45am (Mary my nurse decided I looked tired so made me stay in bed). Once I'd been washed, dressed and had some physio, it was lunch time.

Then there's the afternoon nap from 1.30pm till 3pm. Another round of physio to follow and before I know it, it's dinner time. No sooner is that over then they're asking when you'd like to settle down for the night.

As well as all that the staff are so friendly here that there's always someone popping in for a chat.

Consequently I've hardly had time to touch any of the things I brought with me. Still, I'll have plenty of time to do them, and more besides, given that I'm going to be laid up for several months.

The last time I was admitted to hospital for my hip problem I spent eight very long weeks there.

The first couple of weeks I was pretty poorly as I was recovering from blood poisoning caused by the hip infections, so food was the last thing on my mind.

Once the infected hip was removed and the IV antibiotics started to work the hospital hoped that my appetite would pick up. Sadly it didn't.

A dietitian put me on high calorie, multi-vitamin and mineral milk shake drinks twice a day to try and get me to eat again. If anything it did the complete opposite as they were disgusting !!!!!

Sweets, crisps, etc were banned on the ward. However they made an exception as they were desperate for me to eat something, anything, so John was able to bring in contraband.

I'm not a fussy eater. I love quite a lot of different kinds of food - Italian, Chinese, Indian, French, a little Mexican as long as it's not too hot. The problem is I hate meat and two veg dinners. Always have done. That was the majority of what the Sunderland Royal hospital served.

The hospital dietitian was so desperate for me to eat something that I ended up having meals taken from special diets - Halal, Kosha, gluten free - as they were anything but bland. I even had meals off the children's menu!!!!

Meals here at the King Edward VII hospital are a little different. Each morning, just after breakfast, you are given three menu sheets to complete (your 'homework' as one of the food servers calls it).

The first sheet is for dinner that evening. You get a choice of three starters, three 'salad' main and three or four hot main dishes. To accompany the hot mains are various choices of side dishes too.

For dessert there's at least four options plus a huge variety of ice cream and sorbets, and to end, six difference choices of cheese and biscuits.

Breakfast can be continental, full English or if you're hungry, a mixture of both !!! For health and safety reasons egg yolks must be cook until it's hard. So no soft boiled eggs or runny yokes are allowed.

Lunch is pretty much the same as dinner. Instead of starters you get the option of jacket potatoes or freshly made omelettes with various toppings. There's several hot or cold main options, with desserts similar to the dinner menu.

If you just want a light lunch then you can order a variety of sandwiches and baguettes.

When John visits he's able to have meals with me as they have 'guest menus' which have similar options to patients.

For dinner tonight I had chicken liver pate for starters; grilled turkey escalopes on a bed of creamy mashed potato, grilled asparagus and a creamy mushroom sauce, with a side dish of mixed salad for my main; and a lemon cheesecake with a biscuit crumb topping for dessert. 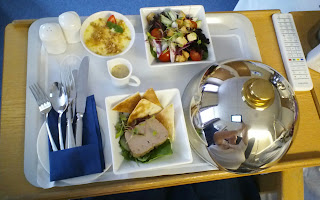 I thought you might like to see a photo of how it arrived.You certainly don't get this on the NHS. 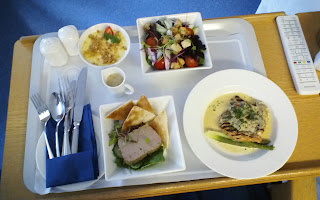 I'm pretty sure that the Prof lives at the hospital as he pops in at all hours. This morning he arrived at 7.20am.

The nurses were concerned about my wound oozing a little and that my hip appeared to swollen. He had a quick look then said everything was fine and nothing to worry about.

I asked him about going home as we'd had a chat about it on Sunday. Originally the plan had been for me to stay for two weeks. However by Sunday I was doing so well he couldn't see any reason why I couldn't be discharged Wednesday.

Whilst I would've loved to go home then, sadly John can't get down to London on Wednesday. No problem said the Prof, just stay until the weekend.

I didn't want to build up my hopes as we'd been here many times before when I was last in
hospital, only for something to happen and I couldn't leave. Hence the reason why I asked again.

The Prof's reply was still the same - this weekend. However there's one condition. I must take it easy. Normally with a hip replacement you can't put much weight bearing effort on the hip for six weeks. I'm no allowed for at least three/four months.

Still it's a small price to pay to get my leg back.

The physio's decided to try me walking up and down stairs this afternoon and I passed with  flying colours. Yeah !!!!

Professor Cobb is really pleased with how thing's are progressing, which is good news. He called in this morning with his two registrars who help with the op. They wanted to see how their handiwork was doing.

Everyone, from the domestics to Matron, is so friendly and helpful. The food is superb and they even have a wine list!!!!!

Stepping out - Moving up

Another day, and another step along the road. Yesterday Marie was walking with a frame. Today she was walking with her old familiar crutches. With warnings from the Physio about taking things easy ringing in her ears she walked to the bathroom, removing the need to be washed in bed. 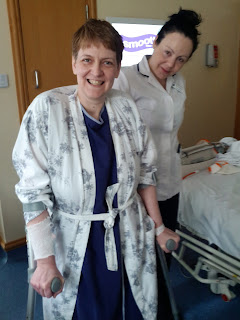 In other news, the Professor is very pleased with how things are going, and there is a possibility that we'll be home within a week. Provided Marie agrees not to overdo things ...

This morning the physiotherapists arrived to get Marie out of bed. They then got her walking along the corridor, then sat her in a chair. This went down very well, as Marie hates lying in bed. You can probably see from the smile that walking was good too. 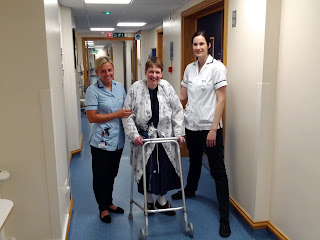 All in all, everyone is very pleased with her progress. Her consultant, Professor Cobb pops in at odd times and expresses his satisfaction. Sometimes it seems as though he never sleeps. He performed the operation at 4:30 on Thursday, and called in to see Marie afterwards. Then he was there before 8am the next day. He called in as we were having dinner yesterday (yes - I'm allowed to eat dinner with Marie in her room !!) then called in just before 10am today.

Marie's room is right above the hospital main entrance, and the flagpole is accessed through her window. At 7:25 this morning, a man came in and took down the hospitals own flag and replaced it with the Union Flag in honour of the Queen's birthday parade.

Once she is used to sitting again, Marie says she will start blogging herself.

Marie's adventure in the Big City

As many of you will know, Marie has been in need of a new hip for some time now (if you want the full story, see The Joint Journals in the sidebar). To cut a long story short, after four years of searching we finally found someone with the skills to do the job. Marie had her operation late yesterday afternoon, and everything is looking good so far. She is in the King Edward VII hospital in London, and it's all rather grand. This is Marie just after afternoon tea arrived. 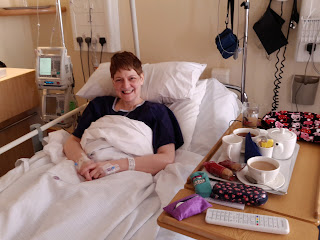 It’s been a bit of an emotional rollercoaster recently.

No sooner had we put my Mam’s house up for sale, we got a buyer for it less than 24 hours after the ‘for sale’ sign went up. It’s been all hands on deck to clear out my Mam’s things. In the end we had to get a skip to get rid of a lot of stuff as there’s only so much you can give to a charity shop. It was upsetting to see my Mam’s house, the only family home I’ve know, end up as rubbish.

It was quite upsetting saying goodbye to the house as not only was it the only family home I’d known, but it was the last link to my Mam.

In February I mentioned that we’d been to London for an appointment and hinted that it may be good news. I can finally review that it is wonderful news.

The appointment was at the King Edward VII Hospital, (the Queen’s hospital no less.....) with an orthopedic consultant (he’s also consultant to the Queen....) who has yes to giving me a new hip. Given that we’d been told on several occasions that the damage was too severe to operate, Professor Cobb has studied the scans and x-rays, and after performing the actual operation using 3D imaging, is confident he can – in his own words – ‘re-attach my leg’.

The operation and stay in hospital isn’t cheap. You could buy a decent car for what it’s costing us. However if it’s a choice between walking and not walking, then there’s no contest.

My op takes place on June 13th and the Prof is confident that I’ll only be in hospital for about two weeks. As the hospital has wi-fi I’m planning to keep a day-by-day account here on the blog.

Watch this space for more news.....

Marie
Posted by Marie and John at Saturday, June 01, 2013 No comments: