So what’s been happening in the BOGOF household these past couple of weeks. Not a great deal I’m afraid.

We went to the Goodfood Summer Show in Birmingham, which was a really good. As expected there were loads of things freebees to taste and drink. We also saw the Hairy Bikers giving a cookery demonstration. They were so funny.

It was a little busier than I would have liked, and as usual, Wizzy was invisible which was a bit annoying. Still, we did get our own back by running over peoples toes when they wouldn’t move out of the way….

Took delivery of a new bath aid (you can read all about it in the Joint Journal), so getting in and out of the bath is a little easier.

The Customer from Hell made a couple of appearances over none receipt of some vitamins.

Had a bit of a run in with my dentist (full details will be appearing in the Joint Journal in the next couple of days).

So other than that there’s nothing else to report.

Last night John was making a batch of Pimms.

So to those who read my comment on 'Summertime' and made some Pimms following my directions - sorry !!!!!

It’s French Jim but not as we know it

Last night an advert for Peugeot cars came on the TV and it announced that any new cars bought in June would received a free mobile phone with SatNav.

“Will I get one of those”, I asked John.
“One of what”, he replied, looking up from the book he had been reading.
“The free mobile phone from Peugeot for every new car bought in June”.
“No”, he said, getting back to his book.
“Why not”, I replied, getting a little annoyed, “even though I don’t take delivery of my new car until September, the paperwork will show that I bought it in June”.
John sighed, “because you’re buying a Renault….”.
Posted by Marie and John at Wednesday, June 09, 2010 1 comment:

Today is overcast and it’s been raining, but yesterday was one of the first days this year that could reasonably be described as summery. So yesterday in the BOGOF household we saw the arrival of the First Pimms Of Summer. 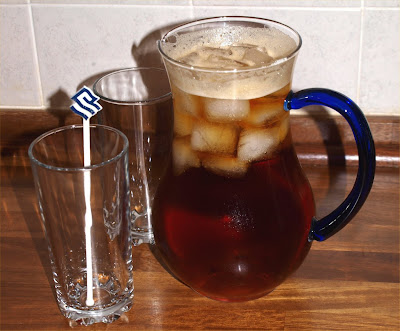 It would be nice to say that we drank it on the terrace overlooking the formal gardens, but sadly we have neither. It was however a welcome reminder that winter is past.
Posted by Marie and John at Sunday, June 06, 2010 3 comments: