Recipe of the week – Honey and lemon chicken drumsticks

These drumsticks are lovely and lemony and so easy to do. They are great for party food as the quantities can easily be doubled, tripled or to however many you need.

Toss the chicken onto a plate of seasoned flour then shake off any excess flour. Fry the pieces until well browned on all sides. This should take about 10 minutes.

Lay the chicken singularly into a roasting tin, drizzle with the honey and sprinkle with the lemon rind. Pour the lemon juice into the tin and bake for 35 – 40 minutes until chicken is thoroughly cooked.

Wonderfully sticky, yummy and great party food as the servings can be easily doubled, tripled. Plus they’re so easy to make…

Make three slashes in each of the drumsticks. Put the soy sauce, honey and puree into a large sealable freezer bag and squish the freezer bag to mix everything together.

Put the drumsticks inside the bag and thoroughly squish them around the mix.

Leave to marinate for 30 minutes at room temperature or overnight in the fridge.

If the chicken has been in the fridge marinating, remove it from the fridge half an hour before you intend to cook it, to allow it to get to room temperature.

Put the chicken into a roasting tin and cook for 35 minutes, turning occasionally, until the chicken is wonderfully sticky and cooked through.

A beautifully creamy tart that is so easy to make.

Melt the margarine/butter in a pan or microwave then stir in the crushed biscuits.

Press the biscuit mix into the base of a 8inch/20cm loose-bottomed tin. Chill for ½ hour.

If you don’t have a loose-bottomed tin, line the tin with baking parchment, allowing an overlap over the side of the tin so you can pull the tart out when it’s set.

Whisk the condensed milk and cream with the juice and rind of the lemons until thick. If you have an electric whisk it will only take a couple of minutes.

Spoon over the biscuit base. Chill until required.

This tart recipe is so versatile:

Instead of one big tart simply spoon the biscuit mix into six or eight individual glass dishes then top with the lemon mix.

You can also make a chilled lime tart by replacing the lemons with four limes.

How about a chocolate lime tart. Mix 1 oz of coco powder to the crushed digestive biscuits then decorate the top of the tart with grated chocolate.

At This Time Of Year

We're not so old in the Army List,
But we're not so young at our trade.
For we had the honour at Fontenoy
Of meeting the Guards' Brigade.
'Twas Lally, Dillon, Bulkeley, Clare,
And Lee that led us then,
And after a hundred and seventy years
We're fighting for France again!

From The Irish Guards by Rudyard Kipling

Coalition is the way of things in modern conflicts. It’s been 29 years since Britain fought a war alone, and more than a century to the one before that.

But fighting a war as part of a coalition can throw up some strange alliances. People traditionally thought of as “the enemy” can suddenly become allies and vice versa. Britain’s traditional enemy was always France, and yet in the two great wars of the 20th Century France was our ally. Similarly we generally regarded Germany as an ally and yet …

The author JRR Tolkien (Lord of the Rings etc.) served as an officer in the Lancashire Fusiliers in 1916 and with his language skills he was often called on to question prisoners. He told of a conversation with a German soldier from the Hanoverian Regiment. The soldier pointed out the irony of how at the battle of Minden on 1759 his Hanoverians fought shoulder to shoulder with Tolkien’s Lancashires against the French.

And lets not forget that while British losses between 1914 and 1918 were 704,803 some of our allies (and enemies) losses were beyond comprehension.

And from the Central Powers

I was reminded of this many years ago when I came across this war memorial in Venice. It commemorates the Italian soldiers who lost their lives fighting against the Austrians and Germans between 1915 and 1918. Note that Italy (and Japan too) fought with us in that conflict. 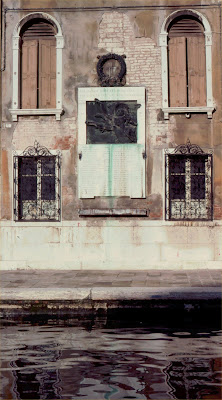 Posted by Marie and John at Thursday, November 10, 2011 No comments:

Recipe of the week - Sticky sausages

These are incredibly sticky and moreish. One is simply not enough….

Combine everything into a bowl or large sealable freezer bag and leave to marinate for a couple of hours or overnight in the fridge.

Remove the marinated sausages from the fridge half an hour before you intend to cook it to allow it to get to room temperature.

Put the sausages onto a roasting tin which has been lined with foil (or use a disposable foil roasting tin) and cook for 35 – 40 minutes, stirring occasionally.

Allow to cool slightly before you try to eat them as they will be very hot !!!!