So what’s been happening in the BOGOF household since we last blogged.

At the end of March, we, along with my mam, went away for a few days. We set off on the Thursday to our hotel in Hockley Heath.

Thanks to the glorious weather on the Friday, we had a change of plan. Instead of going to the NEC, we went to the Black Country Living Museum.

We’ve been there several times before but it was a first for my mam and a first for me in Wizzy. I’m pleased to report that their Wizzy faculties are really good.

On the Saturday we went to the Hobby Craft exhibition at the NEC. Other than possibly buying some fabric, I wasn’t expecting to purchase anything. However the lure of the sewing machine stands were too much, so after a couple of demonstrations, I bought myself a new overlocker and John very kindly bought me a computerised sewing machine.

Before we went into the craft exhibition, my mam wanted to buy a bottle of water, so whilst we were waiting for her, someone came over to say ‘hello’. 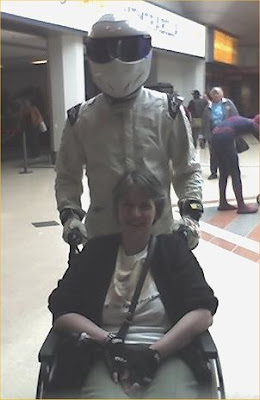 There was a memorabilia exhibition also taking place that day and several characters (Darth Vader, Spiderman, Storm Troupers etc) were wandering around the NEC saying hello to people.

My new sewing machine and overlocker really came in handy as my sewing for our cruise is well underway. So far I’ve altered nine summer tops, made four skirts, two shirts and one dress. Another dress is nearly finished and there’s still three more to make. With only four weeks to go before our cruise I’m hoping to have them made in time.