Remembrance isn't what it used to be 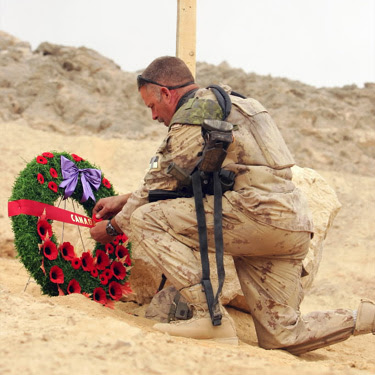 As we approach the centenary of the start of the First World War, our government has finally announced that some form of commemoration will take place. This is stark contrast to our former allies, and even some of our former enemies, whose plans have been in place for years.

And what form will this “commemoration” take place. Will it be like the 50th Anniversary of the end of the Second World War, when the word “Celebration” was banned, and all events had to be low key, no smiling allowed.

Sometimes I wonder how we got like this. It certainly doesn’t seem to be the wish of those involved. Read the words of a First World War solder, Charles Carrington, complaining about how remembrance for him was a joyous thing, and how he felt it had been hijacked.

“The first Armistice Day had been a carnival; the second Armistice Day, after its solemn pause at the Two Minutes' Silence which King George V was believed to have initiated, was a day of festivity again. For some years I was one of a group of friends who met, every Armistice Day, at the Cafe Royal for no end of a party, until we began to find ourselves out of key with the new age.

Imperceptibly, the Feast-Day became a Fast-Day and one could hardly go brawling on the Sabbath. The do-gooders captured the Armistice, and the British Legion seemed to make its principal outing a day of mourning. To march to the Cenotaph was too much like attending one's own funeral, and I know many old soldiers who found it increasingly discomforting, year by year. We preferred our reunions in private with no pacifist propaganda.”

Strong words, but typical of the soldiers of the day. If you asked them, they would not recognise the war depicted by poets and artists, they did not see themselves as the lost generation. They were extremely proud to have served, and taken part in the greatest series of victories in the history of the British Army, which were achieved between August - November 1918.
Posted by Marie and John at Sunday, November 11, 2012 No comments:

We went shopping this morning, and so we had to take a look, more to see the twitchers as to see the bird. They were out in force. 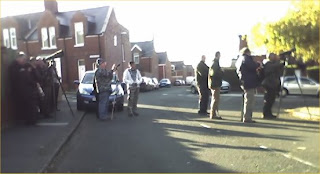 One told us he had come from London just to see. He even loaned us his binoculars so we could have a look. It turns out that the bee-eater is a bright blue bird, about the size of a blackbird.

Sadly all we had was Marie's 'phone so we didn't get the same quality of picture. But here it is anyway.

If you want the full story, more news can be found here

Posted by Marie and John at Saturday, November 10, 2012 No comments:

My journey to work is six and a half miles and begins by taking me across our local "high street" and out towards the edge of the City. I hadn't gone but half a mile today when I noticed a crowd of people on the pavement and in the road. At first I though that there had been an accident, except that some of the people have been very well prepared.

And in the tree was a bee-eater, which according to the news reports is a bird not normally seen in these parts. Ever.

People had come from as far afield as Birmingham just to get a look. Pity the poor folk in the bungalow.

Shortly after we moved into our house we build a garage at the back of the house. Who needs to use a trowel when bricklaying – that’s what’s fingers are for !!!

Over the years the wind, rain and the snow have taken its toll on roof. When it rained you had to pick your way very carefully in the garage to avoid stepping into the huge puddles.
At the beginning of the year John had to do an emergency repair to the roof as the strong wings began lifting the roof panels. One panel broke off and ended up down the back lane. Thankfully John had kept some spare panels so was able to do a patch up repair but what it really needed was a new roof. 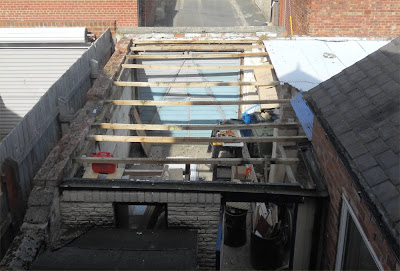 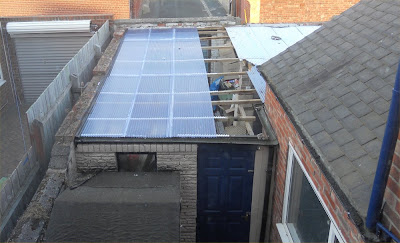 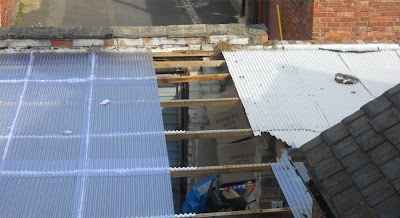 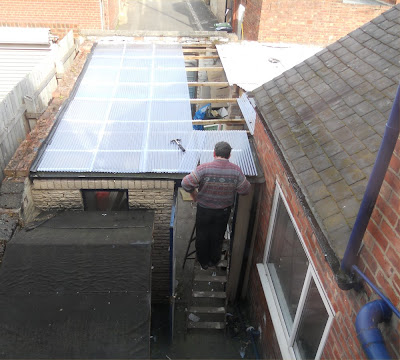 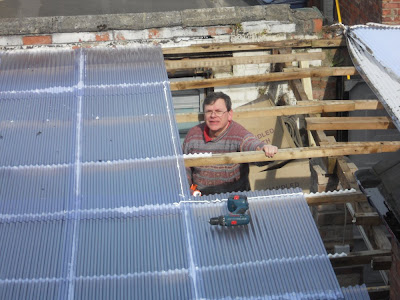 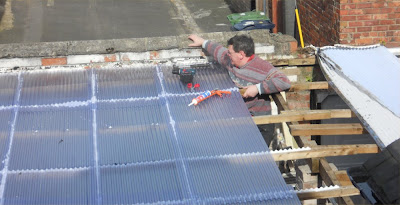 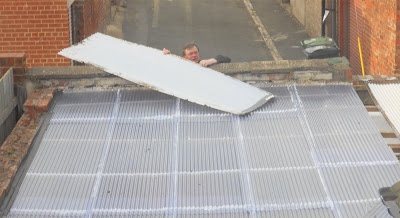 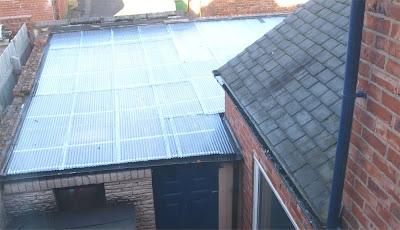