Week two started pretty much like the previous week so Saturday and Sunday were relatively quite days.

Monday and Tuesday John tackled the loft. It needed more insulation on the walls and ceiling so several polystyrene sheets were bought from Wicks (that was the order they messed up last week).

It was also a good time to go through all the stuff that had accumulated in the loft. There must have been more boxes than Pickford’s up there!!!!!!!!

Wednesday we had a day out in Weardale. We had a lovely car picnic lunch overlooking the hills near Stanhope. Then on the way home we stopped off at the Wessington pub for dinner.

Thursday we decided we’d try a new ice-cream parlour that had recently opened in Sea Road. The recent promotional flyer that had come through our door looked really enticing: a huge selection of food and ice-cream, good Wizzy access and a warm, friendly welcome - I think you can see where this is going…….

The thin tatty table menu didn’t live up to the ‘huge selection of food and ice-cream’; the no step at the entrance doesn’t count as ‘good Wizzy access’ when you have to encounter a slalom to get into the building and the ‘warm friendly welcome’ didn’t exist – we were the only customers, yet were completely ignored by the three members of staff. We walked out…..

Instead we went to ‘Subway’ for our lunch, where the staff couldn’t have more friendly and helpful. Given that Sea Road is now awash with eating establishments, I don’t think the parlour will be around for very long.

Friday we went to the Chinese again for lunch and as usual the service and food were superb.

Saturday we got Big Bertha down from the loft (she’s a huge carpet cleaner) and gave the carpets a good clean. The water that came out into the reservoir was filthy !!!!!!

We spent Sunday just chilling out and not doing a great deal – not a bad way to spend the holidays.

John’s on holiday from work for two weeks, and for once, it’s not been spent doing major DIY projects.

Saturday and Sunday were quiet days not doing very much.

Monday saw John trying to fix a persistence leak in the bathroom. So far, no water….

Tuesday I had an appointment to see the Hand (Wo)Man at the hospital. She has advised me to have surgery on my hand as it’ll only get worse. Full details will appear in the Joint Journal, when I eventually get round to typing it up…..

We then went to the Wessington Pub for lunch – two x three sausages, two fried eggs, chips and peas, followed by apple pie (no custard for me).

After that it was some retail therapy – five huge balls of wool, five pieces of fabric, two cardigans, one top, two irons and some headphones.

Wednesday we went to Alnwick to visit one of the biggest second-hand bookshops in the UK. John had been wanting to visit it for ages but we never had the time – until now. What a place it was !!!!

No sooner had John left me at ‘Cookery’ I had my eye on a 1954 four volume set on catering and a 1953 edition on ‘Good Housekeeping Complete Cookery’. John found a 1938 army manual on driving and maintaining motor vehicles – it smells like the inside of a classic car…..

After spending a fortune on those we then headed to the Metro Centre to do yet more retail therapy.

Thursday was meant to be a DIY day in the loft for John, however Wicks forgot to order his bits and pieces…. The Customer from Hell also made an appearance. Yet another problem with my prescription from Lloyds the chemist. Again full details will appear in the Joint Journal.

Friday was my birthday. The Birthday Bunny was extremely generous so I got loads of presents from him – mainly books and a two CD set of Showadywaddy, which I’m playing constantly (sorry John….).

I’m afraid there isn’t much left of my birthday cake. 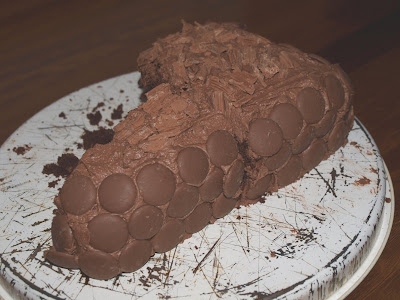 Saturday and today are more quite days.