A light at the end of the tunnel

After a wait of nearly 10 months I finally went to hospital on Monday for Carpal Tunnel Surgery on my wrist.
The holdup was because occupational therapy and physiotherapy had been fighting over who was responsible for arranging help for me to walk. As I’m not able to put any pressure on my left hand I can’t use my Stickies.
The whole thing has been a bit of a farce. I was moved from my original consultant’s patient list, as he had a huge surgery waiting time, and put onto the books of a newly arrived lady consultant.
A surgery date was given, however OT and physio were still arguing who was going to sort out a walker for me, so that date had to be cancelled.
I was then moved to another consultants list (no idea why…..) and yet another date was given and then cancelled, because OT and physio still couldn’t agree as to who was responsible.
I received a phone call from consultant number three’s secretary to say that OT and physio had finally decided who was responsible – physio as it turned out – and that someone would give me a ring to see what I would require.
Just after we came back from our cruise Number Three’s secretary rang to ask if I could come in for my op in two days time. Sadly I had to say no as it was too late to arrange time off work for John.
Eventually a date was sorted so John could take some time off work to give me a hand – no pun intended!!!!

As I hadn’t heard anything from the physio about arranging a walker for me I rang Number Three’s secretary a couple of days before my op. She assured me that physio were well aware of everything and that they would come and see me before my op to sort out a walker.
When we arrived at the hospital at 12.30pm John decided to stay and wait for me as I was first on Number Three’s surgery list and the op would take less than twenty minutes.
I asked the nurse who was booking me in when the physio would be coming to see me. She had a blank look on her face so I explained what had been agreed. It would appear the Day Surgery Unit knew nothing about it and after phoning physio, they too were in the dark about it. Isn’t NHS communication wonderful!!!!!!!
While I was waiting for the physio to come Number Three popped in to introduce himself.  He was curious as to why it had taken 10 months so I explained what the holdup had been.
The physio finally arrived at 2pm (she had forgotten she had been paged….); by which time Number Three reluctantly had to put me to the back of his surgery list as he couldn’t wait any longer.
After trying out various walkers a suitable one was found, then once I’d changed into surgery attire, I was allocated a bed on the ward.
I eventually had my op at 4pm and by 4.25pm I was back on the ward eager to go home.
By the time I’d been helped back into my clothes, had a glass of water (I couldn’t leave until I’d had something to drink – they had wanted me to have a cup of tea and a sandwich but water was quicker) and a trip to the loo (again obligatory), it was 5.15pm. Finally after been given a list of do’s and don’ts I was eventually allowed home.
I did feel sorry for John, as, bless him; he had been waiting for nearly four hours!!!! Thankfully he remembered to bring a book with him...
Marie
Posted by Marie and John at Saturday, September 29, 2012 2 comments:

I can’t believe it’s been that long

I was just checking the blog and couldn’t believe that the last entry was 16th July. Where has the time gone !!!!!

In our defence there hasn’t been anything exciting to blog about. Plus I’ve been really busy sewing. Lame excuses I know for not blogging but that’s the best I can come up with...

So, what have I been sewing. A rucksack for Jenny, a jewellery wrap and bag for Jan and a tool bag for John.

When Jenny and Jan were up North in June I asked Jenny if she would like another bag making as a birthday present – last year I made her the Tote bag below. 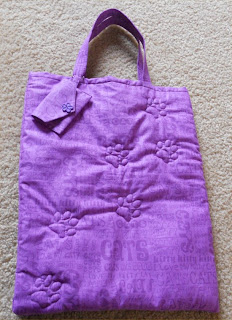 “Can you make me something like this”, she said, showing me her rucksack.

“I don’t see why not”, I replied, then having found a tape measure and a note pad and pen, took some measurements and did a rough drawing of the rucksack. 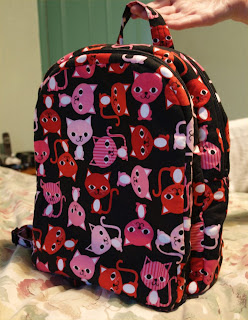 Because I was making something for Jenny I ask Jan if she would like me to make her something. She asked if I could make her a bag to keep her jewellery making tools in and a necklace wrap.

“Is it possible to have them in lilac”, she asked, “as that’s my corporate colour”.

Jan is setting up a jewellery making business so I said I’d try my best. 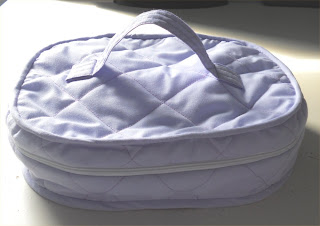 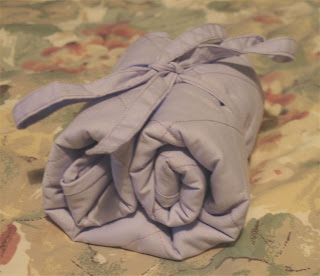 Sadly I haven’t got round to taking a photo of John’s tool bag yet. I will be soon though as I’m in the middle of setting up my own sewing blog. It’s still in the planning and preparing stage but I hope to have it up and running by the end of the year. Watch this space for more details….