Peace on Earth - you must be joking

I know our new neighbours want the building work done as soon as possible but is it really too much to ask that they give us a break from all the noise for a day or so.

Not a chance it would seem. They were hard at it all day on Christmas eve. They even did some work yesterday – yes Christmas day ! ! ! . It’s now Boxing day and they’re still at it.

As you can see it’s now getting on my nerves. I appreciate that they want the house renovated but have they once given us neighbours who are either side of them a thought. After all we’ve had to put with all the noise every single day for the past eight weeks.

I’m beginning to hate our new neighbours and they haven’t moved in yet ! ! !

Marie
Posted by Marie and John at Monday, December 26, 2005 No comments:

Well yes, it is. Sometimes. I'm sitting in the lounge beside the Christmas tree with a laptop on my knee connecting through a wireless access point in the spare bedroom.

On the minus side, we have two access points (yes, two - but one is used as a bridge for certain functions) and in the past month BOTH power supplies have packed up and both access points needed their firmware reloading. You don't get those sort of problems with a length of CAT-5 cable.

Of course being the sad engineer type that I am whenever something electrical gets thrown out I always keep the power supply. So when I needed a 5 volt 1 amp supply with a 3.5 mm connector ...

John
Posted by Marie and John at Friday, December 23, 2005 No comments:

Ever since we’ve been married we’ve always saved one and two pence coins that’s either been in our change or what we’ve found lying on the pavement and given them each Christmas to the Salvation Army.

Sadly due to one thing or another the amount we give has been declining each year. Gone are the days when they received over £25.

We’ve never missed the money, well one and two pence’s you don’t, so if everyone put aside their small change this would really benefit charities.

There is however one down side to this - the government would run out of one and two pence coins….

This will probably be the last Blog until Christmas so I hope you have a great Christmas and that Santa brings you lots of presents.

PS here’s hoping the builders next door decide to take a long holiday as I could do with a bit of peace and quiet ! ! ! ! !
Posted by Marie and John at Friday, December 23, 2005 No comments:

Scrooge of the week

You may remember I wrote a complaint letter to a certain paint company who has an X in their name (see ‘It’s been a busy old week’ on December 4th).

Today I have received a reply.

First of all they have me down as ‘Ms’. If they had been bothered to read my letter properly they would have seen that I am in fact ‘Mrs’.

The letter makes no reference to the complaint I made regarding their technical help department.

What the letter does do is waffle on about how good their products are but offers no explanation as to what the cause of the problem could be.

As a ‘gesture of goodwill’ they enclose a cash redemption voucher to the value of £15 against any of their products. In order to get my money back I have to send them a receipt then wait 21 days for a cheque to be dispatched.

Considering the paint costs us more than £15 we are financially worse off. Then there’s the amount of time we spent giving the paint work four coats and the time next year in having to redo the whole thing. Plus we have to buy a product of theirs in order to get your money back, something we are not prepared to do.

I certainly think their ‘gesture of goodwill’ is pretty poor.

I have written and received replies to a good number of complaint letter and everyone of the companies have been extremely generous. This one has got to be the worst.

Mention mince pies at your peril ! ! !

Goodness knows why but I had agreed to make 8 dozen mince pies for various people. As there wasn’t enough room in our original freezer to store them I had to wait until the new one came.

So Thursday was my baking day. Everything was going perfectly until I tried to get them out of the so called non-stick bun tins. Out of 4 dozen only 26 were salvageable but in no fit state to be given to anyone.

To make matters worse the workmen next door spent the entire day ripping out the old kitchen units and as our kitchens are back-to-back it was pretty noisy.

As I’d already made the pastry I had no option but to plod. Thankfully you can freeze uncooked mince pies in their tins and cook them at a later date.

I didn’t want to take the risk of having a repeat performance so bought two new non-stick tins at Morrisons on Thursday night.

Yesterday afternoon the rest of the mince pies were baked and guess what – they stuck ! ! ! At least this time most of them were in reasonable condition to be given away.

Next year I’m buying them from Sainsburys……

Marie
Posted by Marie and John at Sunday, December 18, 2005 No comments:

“Why don’t we get another one?”

Every year around this time I always moan that the freezer isn’t big enough.

I don’t know why but items, no matter how small they are, when bought to be eaten during Christmas take up loads of freezer space.

Our freezer is so full that I’ve told my mam if she runs out of the meals I make her then I’ll have to cook them at her house as there is simply ‘no room at the inn’….

After 11 years of putting up with my annual freezer moans John replied ‘why don’t we get another one?”.

“How about the cupboard under the stairs”.

So this morning we took delivery of another freezer.

It’s come just at the right time as Dennis, our ex-next door neighbour called round this morning with three jars of home made mincemeat.

I can now get started on making the eight dozen mince pies ! ! !

Marie
Posted by Marie and John at Tuesday, December 13, 2005 No comments:

Don’t worry some mystical power hasn’t bestowed Fulwell with gorgeous weather (you can tell I’ve been watching too much Buffy the Vampire Slayer….). We actually have a warm kitchen.

I should explain. When we bought the house we replaced the small kitchen radiator for a larger one. For as long as either of us can remember it has always been cold in the winter and hot in the summer.

We thought it was due to it being the last radiator on the central heating system so only got hot when the other radiators didn’t need the heat. Hence being hot in the summer.

Last night we noticed that the radiator was cold at the top and warm at the bottom so guessed it must have an air lock.

When the boiler man came back to tidy up any loose ends this afternoon he asked if everything was working ok so we mentioned the radiator.

It turns out that there wasn’t an air lock after all but a blockage.

For the first time in 11 ½ years we have a hot (and I mean hot) kitchen radiator.

Which means:
No more frozen pipes in the kitchen
No more using the electric fan to heat the room
Food taken out of the freezer will actually defrost
And most of all it won’t be warmer outside than in….. 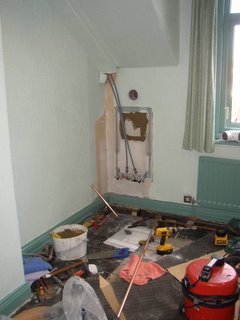 Five weeks since our wheelie bin was stolen we’ve finally been given a replacement. So no one ‘steals’ it again we’ve painted our house number and street name on it.

We’re sitting in a cold house with no water or gas as we’re having our central heating boiler replaced. Who’s bright idea was it to get it replaced in the middle of winter – mine…. Thankfully the weather is better than it was two weeks ago. Then it was actually warmer outside than in our kitchen ! ! !

They’ve just gone off for lunch with the old boiler out and the new one sitting on the bedroom floor waiting to go in.

There’s also a nice hole in the wall and a lovely draught coming though it. 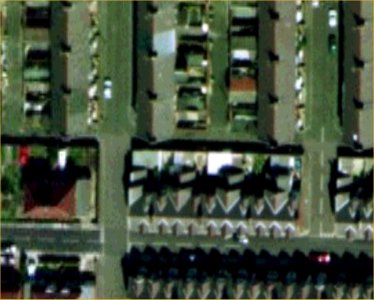 They tell us it's an urban myth that you can see it from space. However, with a little help from the satellite photos on Google Earth there are three very interesting things you can see from space.

It’s been a busy old week

Yippee ! ! ! We’ve finally downed our paintbrushes. It’s taken us three months but we’ve managed to get the living room and dining room done.

However thanks to a certain paint company who has an X in their name we’re going to have to redo the dining room. Four coats later on the wood and metal work and it’s still not covering over the old colours.

I phone their help line on Monday wanting advice as four coats seemed a bit excessive especially when their non drip gloss was anything but. I got a snotty little man on the other end of the phone who tried to fob me off with all excuses known to man.

It must have been near his tea break so took my phone number, said he’d look into it and ring me back the next day. You guessed it, he didn’t.

Nearly a week later and still no phone call so the customer from hell has put pen to paper. Lets just say the letter will burn it’s way out of the envelope. Upset me at your peril ! ! !

I also had to shout at our electricity company on Monday. We received an estimate bill the beginning of November even though the meter was read twice in three days – don’t ask ! ! ! So yet again they were given the meter reading and we waited for a revised bill to be sent.

No revised bill came, only a letter demanding payment for the estimate bill otherwise they will cut us off. I was not amused and made my feeling known to the poor girl who happened to take my call. It would seem that there is no record of either of the two readings nor of the one I phoned in – wonderful….

So what did I have to do, yes you’ve guessed it, give them yet another reading. I was assured that I would not be cut off and that I would receive a bill on 8th December. The bill arrived on Wednesday – so much for 8th December…..

Good news on the replacement wheelie bin. I had to ring the council asking if they could send someone out to clean up the mess as the local scavengers who patrol the streets ahead of the bin man had very kindly emptied the contents of several black bags in the back lane. While I was on the phone I asked if the wheelie bins were in stock. ‘Yes Mrs Harper, they’ve just come in so you should be getting yours shortly’.

Finally got all the Christmas cakes made. Now to start on the eight dozen mince pies ! ! !

Marie
Posted by Marie and John at Sunday, December 04, 2005 No comments: