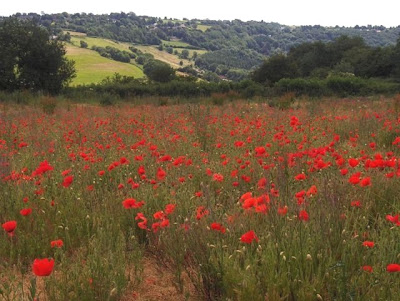 Some of you may know that my grandfather, Harry Hayhurst was a soldier. He was a Yorkshire man and in 1911 joined the York & Lancaster Regiment.

In 1914 he was serving in Jubbulpore (Bengal) and when war was declared the army reduced their presence to a skeleton staff and handed most jobs over to Indian troops. Harry landed back in England on Christmas Eve 1914 and was shipped to France in January 1915.

The 1st York & Lancs were positioned around Ypres and on the 8th of May they defended a ridge at Frezenberg. At the start of the day they were 950 strong, and by the end just 83 were left unwounded, the most senior being a sergeant. Harry was himself seriously wounded and cut off from his battalion. After staggering down a railway line Harry found himself in a dressing station run by the Canadian Army.

The officer in charge of the Canadian dressing station was a Major, by the name of John McRae. The following year, while serving in the Somme region the newly promoted Lieutenant Colonel John McRae was moved to write these famous words :

In Flanders fields the poppies blow
Between the crosses, row on row
That mark our place; and in the sky
The larks, still bravely singing, fly
Scarce heard amid the guns below.

We are the Dead. Short days ago
We lived, felt dawn, saw sunset glow,
Loved and were loved, and now we lie
In Flanders fields.

Take up our quarrel with the foe:
To you from failing hands we throw
The torch; be yours to hold it high.
If ye break faith with us who die
We shall not sleep, though poppies grow
In Flanders fields.

For those who want to know such things, Harry was shipped back to Britain and was sent, first to a hospital in Nottingham and then to Sunderland. There are no records of which hospital but it likely that the Sunderland hospital was a wartime rehab centre for gas victims. During his time there, Harry met and married one Mahala Primrose Francis and made Sunderland his home. Sadly he died in 1956, aged just 66. Lt. Colonel McRae died from pneumonia in 1917.
John
Posted by Marie and John at Monday, November 10, 2008

What a lovely and moving piece, Marie. And such a poignant picture.

Its lovely people are remembered for serving their country and for what they went through.

Fascinating. These personal family stories make it so much more than a history exercise.